Carbon Filters and How They Work

One of the biggest challenges that an indoor hydroponic gardener faces is the unpleasant odors coming from their plants or system. The best way to tame those plant odors and breathe easy is by using a carbon filter. Carbon filters can be used for both purifying water and air to remove toxins and odors for healthier, happier people and plants. 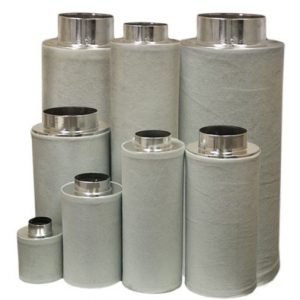 Carbon granules, also called granular charcoal, is simply pulverized charcoal that has a binding agent added to it to prevent it from being dusty. The granules have a larger surface than chunks of charcoal, so pound for pound, the granules can purify more air and water. Just one pound of carbon granules has the capacity to purify 100 acres of water and is the best medium for purifying both water and air. Its easy to see why this can be such a powerful tool.

Carbon filters not only contain granulated carbon that works hard to reduce odors, but the granules are typically impregnated with a binding agent that does more that keep the dust down. For example, carbon granules are often impregnated with silver to provide antiseptic properties and are the choice of hospitals for use in air and water filtering systems. The use of carbon air filters in hospitals help prevent the spread of germs and diseases. It is important to stop the spread of disease in hospitals and that goes equally true for grow rooms. Grow rooms are breading grounds for nasty pests and natural diseases like mold. Spider mites, mold and powdery mildew are stopped in their tracks when a carbon filter is used effectively in a grow room.

To remove air-borne odors and keep a grow room smelling fresh, suspend a filter from the ceiling or stand it upright on the ground. Attach the filter to the intake of an extractor fan. The room air is drawn through the filter before entering the extractor fan and odors are captured by the carbon granules. It is important that you pull fresh air into your grow room from an outside source. You do not want to recirculate the same air in your grow room as the air will become stale and unhealthy for plants. Most indoor plant growers report zero smell in the air once they install a carbon filter to the extractor fan. Any contaminates which may be lurking in the air will also be stopped and captured as the air moves through the carbon filter. If it is possible to vent straight outside then go for it. The more fresh clean air your plants get the better!

The two elements that makeup most organic substances contaminating the water in your hydroponic system are carbon and hydrogen. Activated carbon is perfect for the removal of all unwanted contaminations. The most common water cleaning system is known as a reverse osmosis system or a RO system. A quality carbon water filter can be attached right to the spigot of the water source used for your hydroponic growing system. The carbon filter will catch and hold all contaminates that might impede the growth of plants or fish.